Being an advanced heart care center in the region, Apollo CVHF Heart Institute is a hub for informative events and activities that raise awareness about heart health.

We applaud our team for excellent effort and wish our patient a speedy recovery. Dr. Sanjog Kalra is one of the pioneers in “ZERO Contrast PCI”.

ZERO Contrast PCI is useful in….
1) CTO ( Chronic Total Occlusion)
IVUS guidance helps to create true lumen and with the help of image it is easier to open Chronically Total Occluded Artery.
2) Ostial lesions- lesions in the opening of the Coronary Arteries can be stented very effectively with the help of IVUS.

October
2022
We wish you all a very Happy Diwali & A Prosperous New Year. 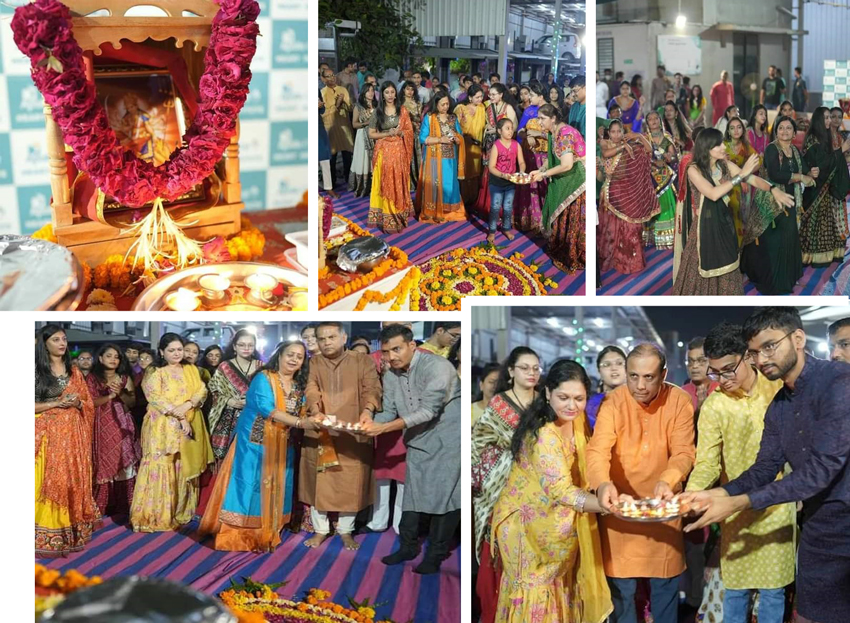 September
2022
In recent press coverage Apollo CVHF CEO Dr. Sameer Dani talks about the recent trend of increase in Coronary artery disease due to COVID-19. It is very important to check in with your doctor if you have pre-existing heart conditions & have suffered from Covid-19. Don’t forget to consult your cardiologist. 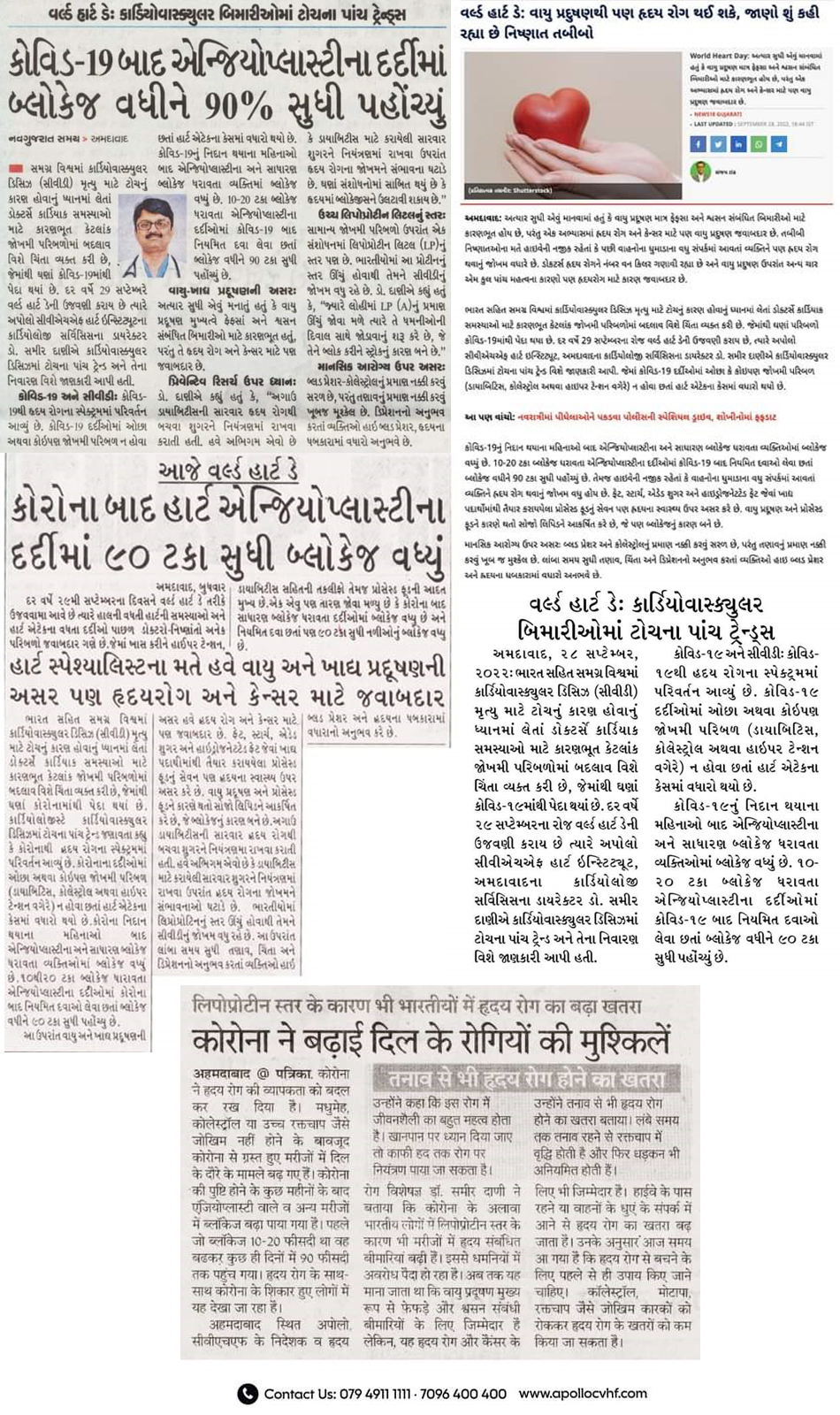 September
2022
Apollo CVHF Heart Institute Ahmedabad became host for Amdavad Distance Runners-ADR and celebrated upcoming World Heart Day. ADR is the largest group of runners in Ahmedabad. They completed thieir 15 to 21 Km. run and reached at Apollo CVHF Heart Institute in the morning. This year’s Slogan for World Heart Day is “Use Heart for every Heart”. Being emotionally attached , being more socially connected with each other reduces stress, which is one of the risk factors of Heart diseases. Same in line, around 200 people assembled and enjoyed this event. Dr.Sameer Dani- Chief Interventional Cardiologist & CEO Apollo CVHF Heart Institute addressed the group with relevant speech. He announced the launch of Specially defined Athletes Health Check up package. All the participants had lots of fun. Snaps posted here tells the story of joyful moments of the event. 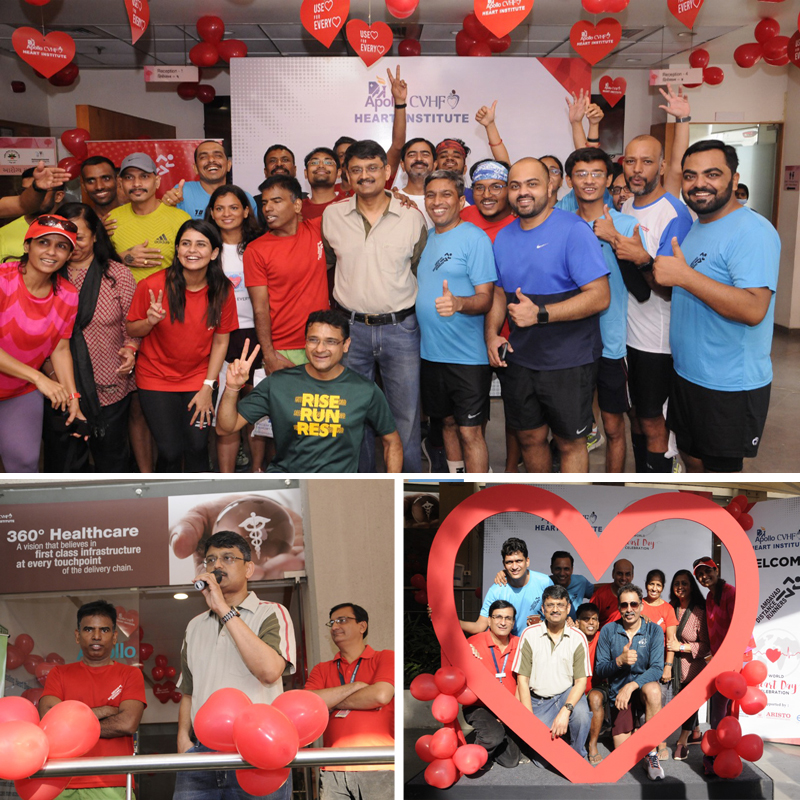 Dr. Sameer Dani was the Moderator to the CME. Information exchanged during the CME enlightened the audience about the usage of molecule Vericiguat in Heart failure management. 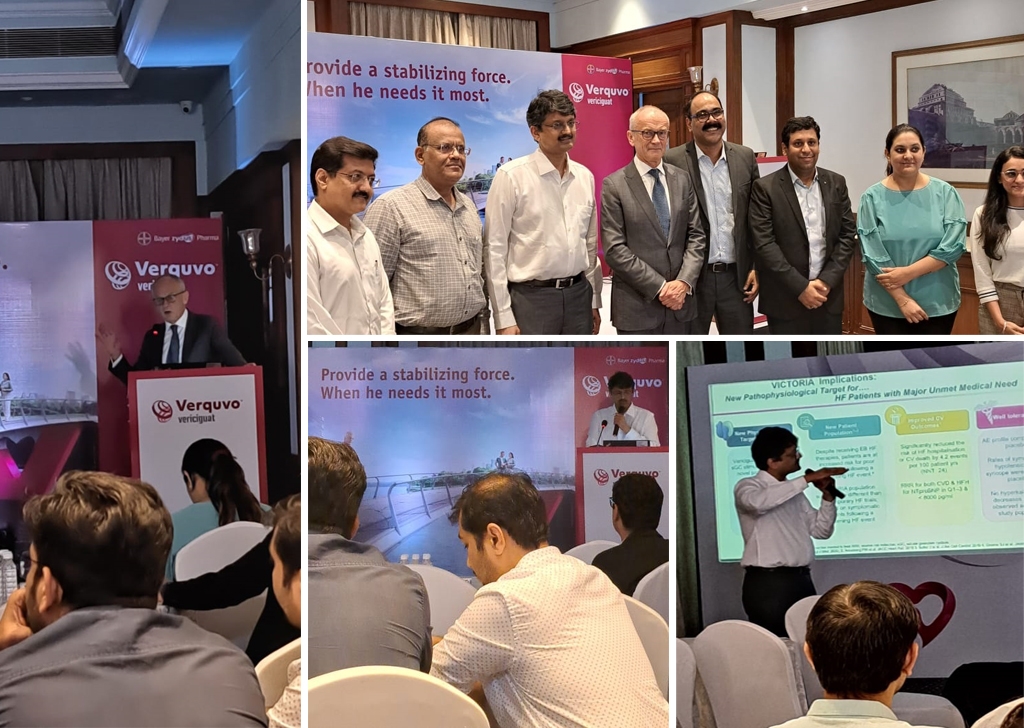 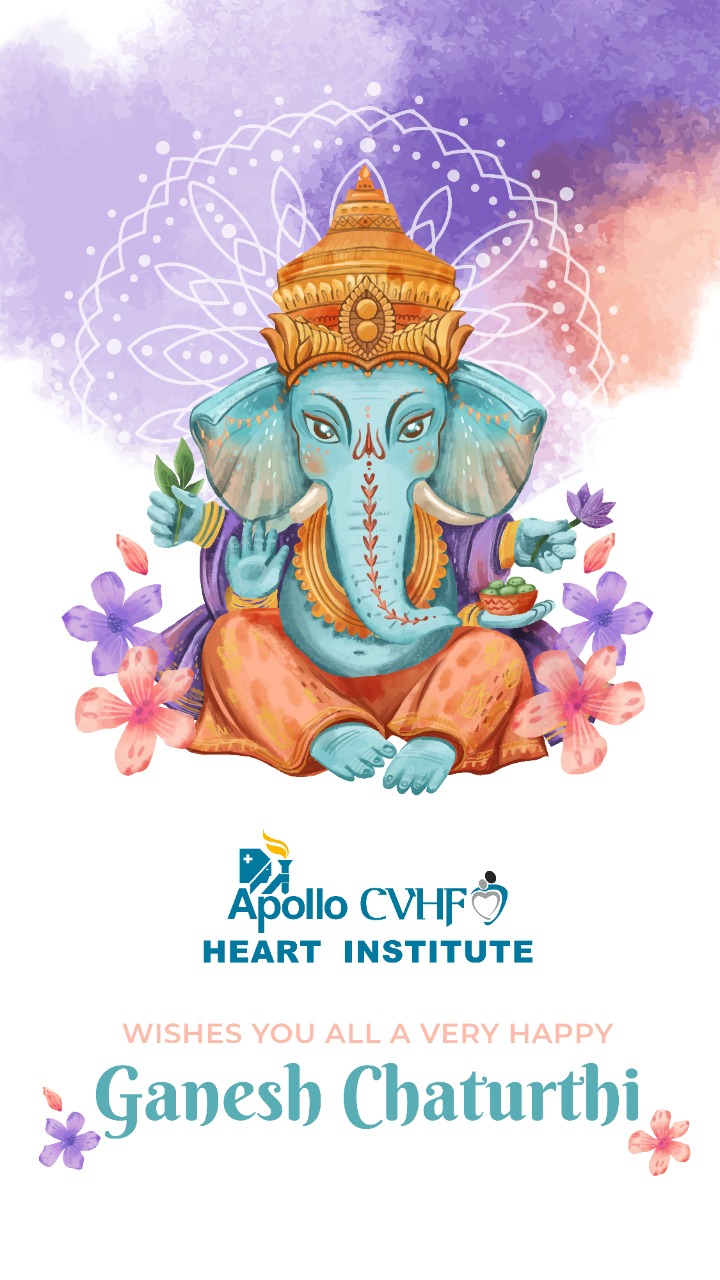 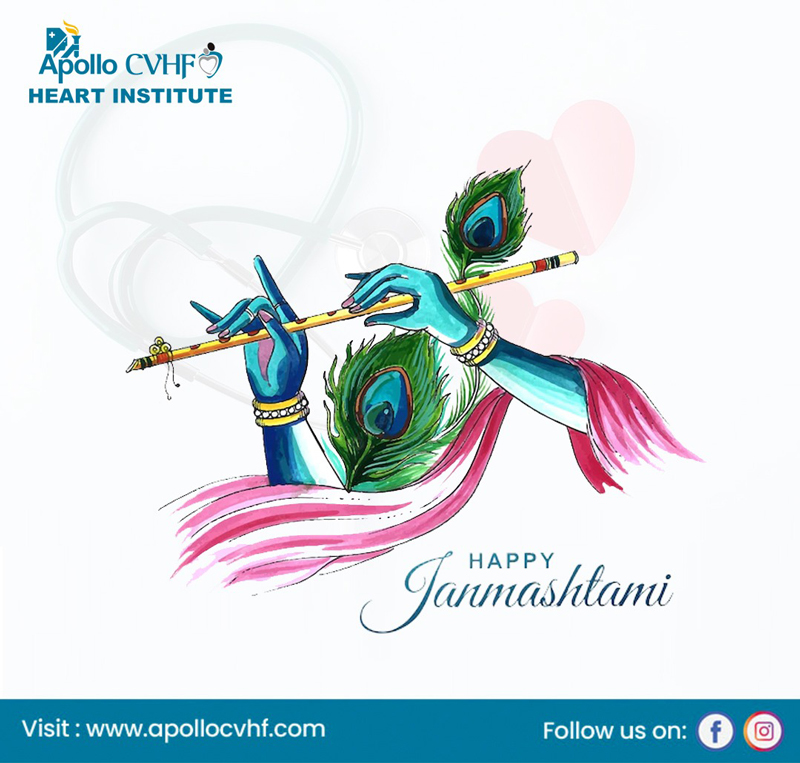 During a Press Meet in the afternoon with Print & TV media they briefed about the usage of Drug Coated Balloons in certain conditions instead of Stents. Using stents leads to permanent caging into the lumen of the Coronary Arteries and due to In Stent Restenosis (ISR) it sometimes become the cause of recurrent Angioplasty requirement. Drug Coated Balloons can be the perfect option to Stents in certain conditions. 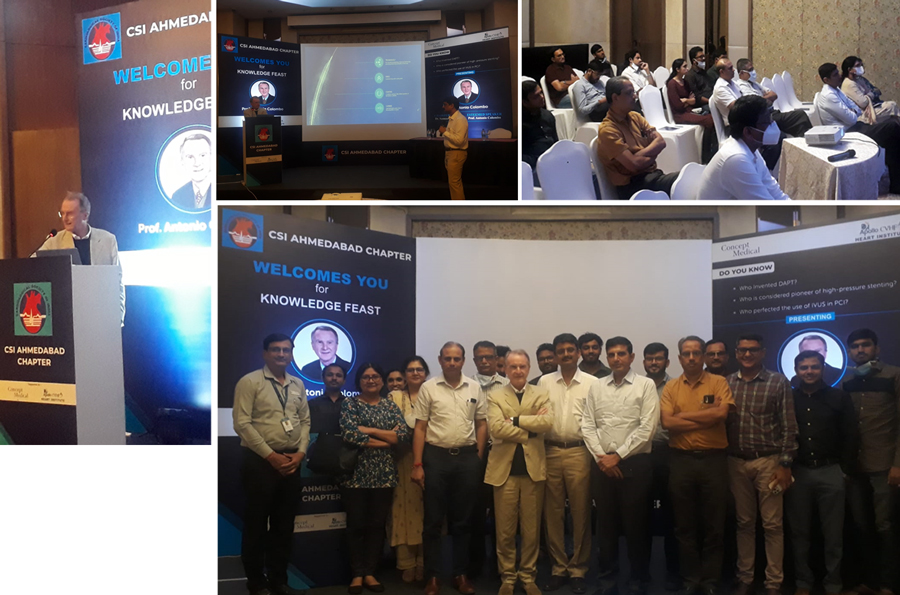 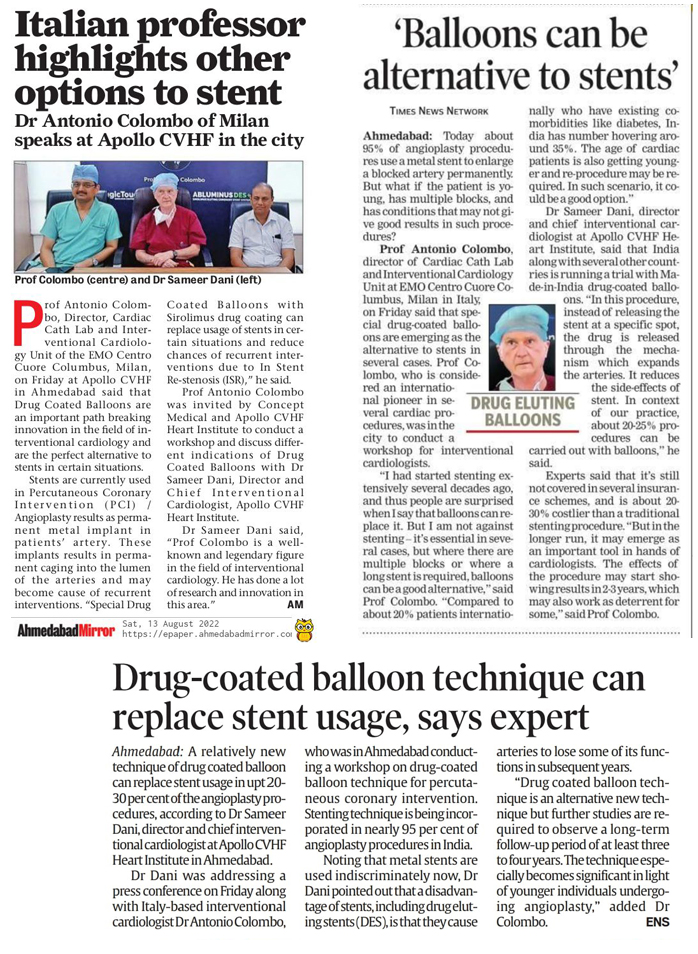 Cardiological Society of India (CSI) Ahmedabad Chapter successfully organized National Interventional Council (NIC), CSI-NIC Mid Term Meet 2022 at Ahmedabad between 17th to 19th June 2022. Dr.Sameer Dani-Organizing Secretary involved all the members of CSI and team of all the knowledge partners from Healthcare Industry and articulated one of the biggest events in the field of Interventional Cardiology. Live Cases were demonstrated. Debates, discussions on numerous topics, techniques and Scientific sessions proved to be a bouquet of knowledge feast for all the delegates. Renowned Interventional Cardiologists from across the country and abroad participated. Around 2500 visitors recorded to visit the venue during conference. Entertainment programmes such as Magic Show & Musical Night were appreciated by all. All in all it was knowledge sharing event with Get together of stalwarts who exchanged knowledge enjoying it thoroughly. 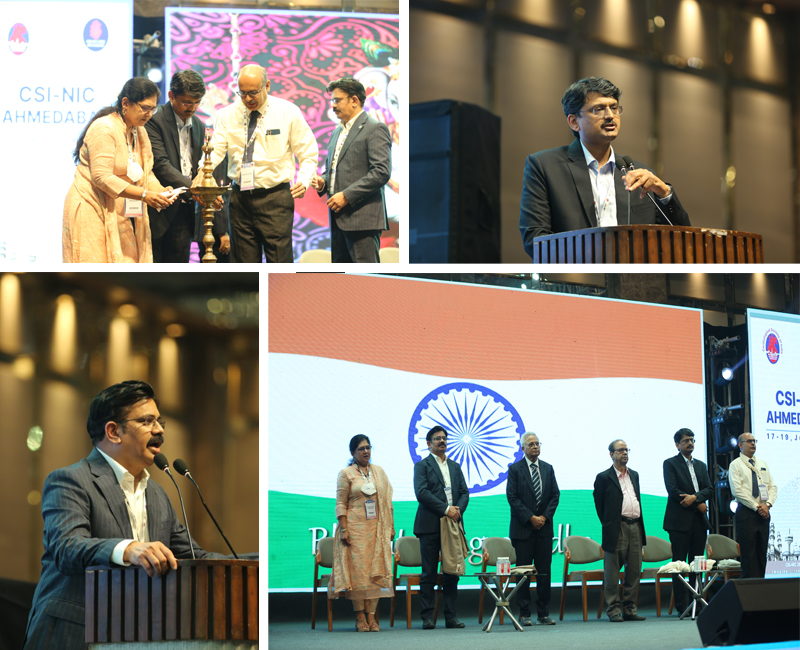 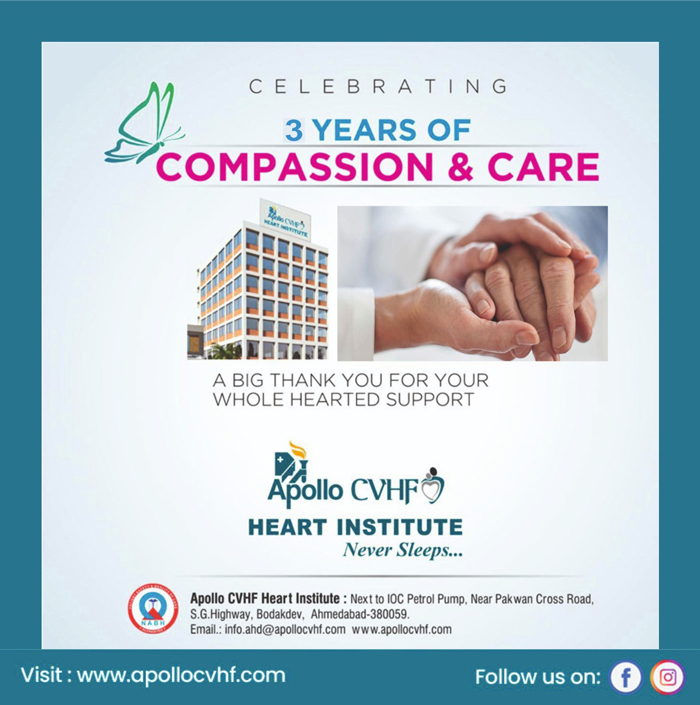 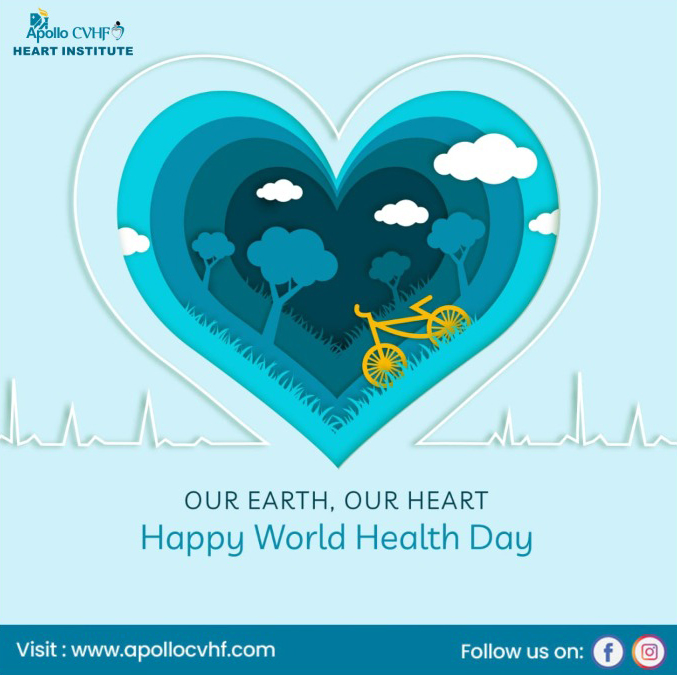 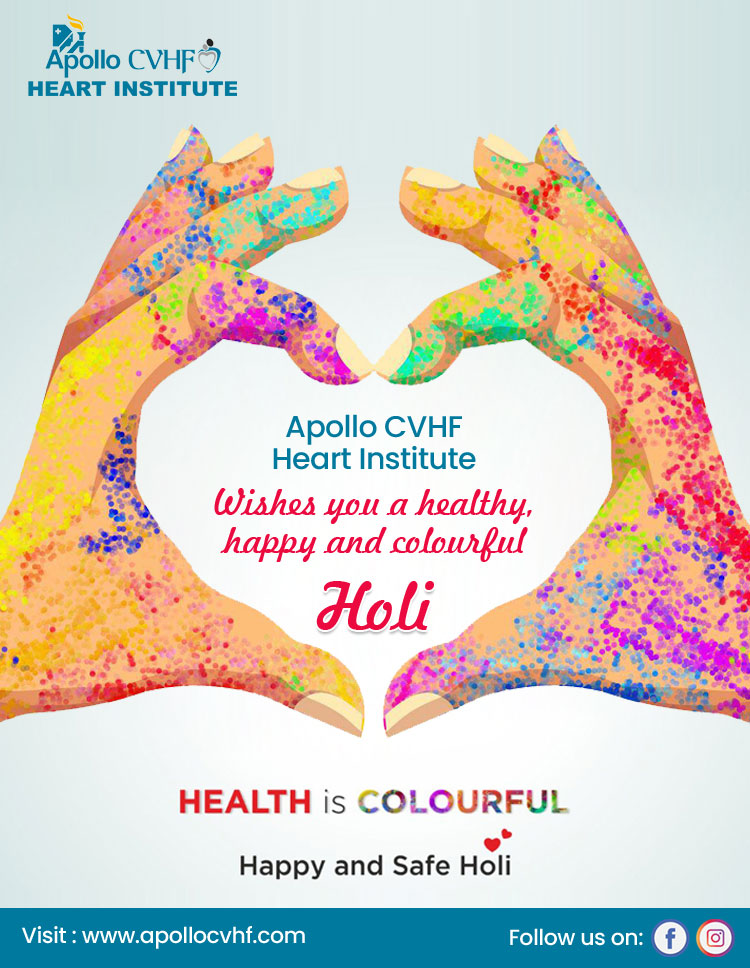 We are proud to announce that Dr. Sameer Dani & Dr. Raj Makkar along with Apollo CVHF team have performed yet another successful TAVR procedure on 86 year old male patient.

Our team of experts from USA are here till March 12th March 2022. If you wish to take advantage of this opportunity to consult with them book an appointment today. 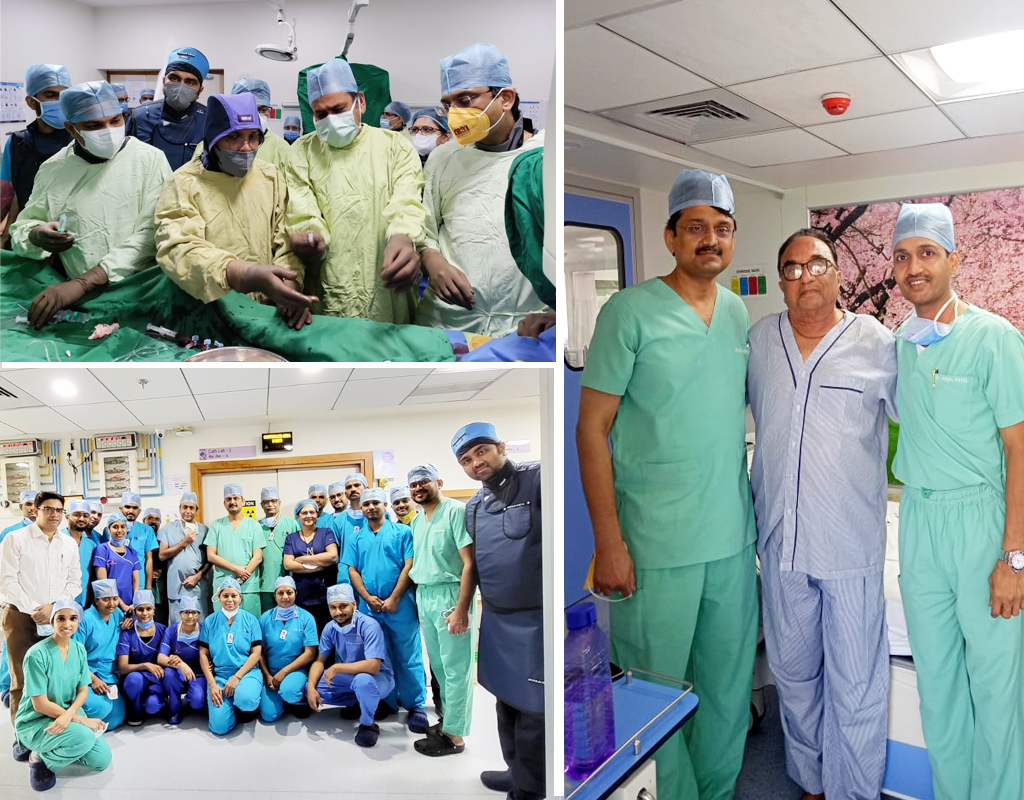 Apollo CVHF Heart Institute Ahmedabad celebrated International Women’s day with big bang. Right from the morning all female visitors got delighted as they were being greeted for Women’s day with rose buds. They were more happy as management declared 10% discount on all OPD services starting from 8th March to 12th March ’22.

Our patients, Nursing staff and doctors were also greeted.

Participation from all the departments made the programme very successful. 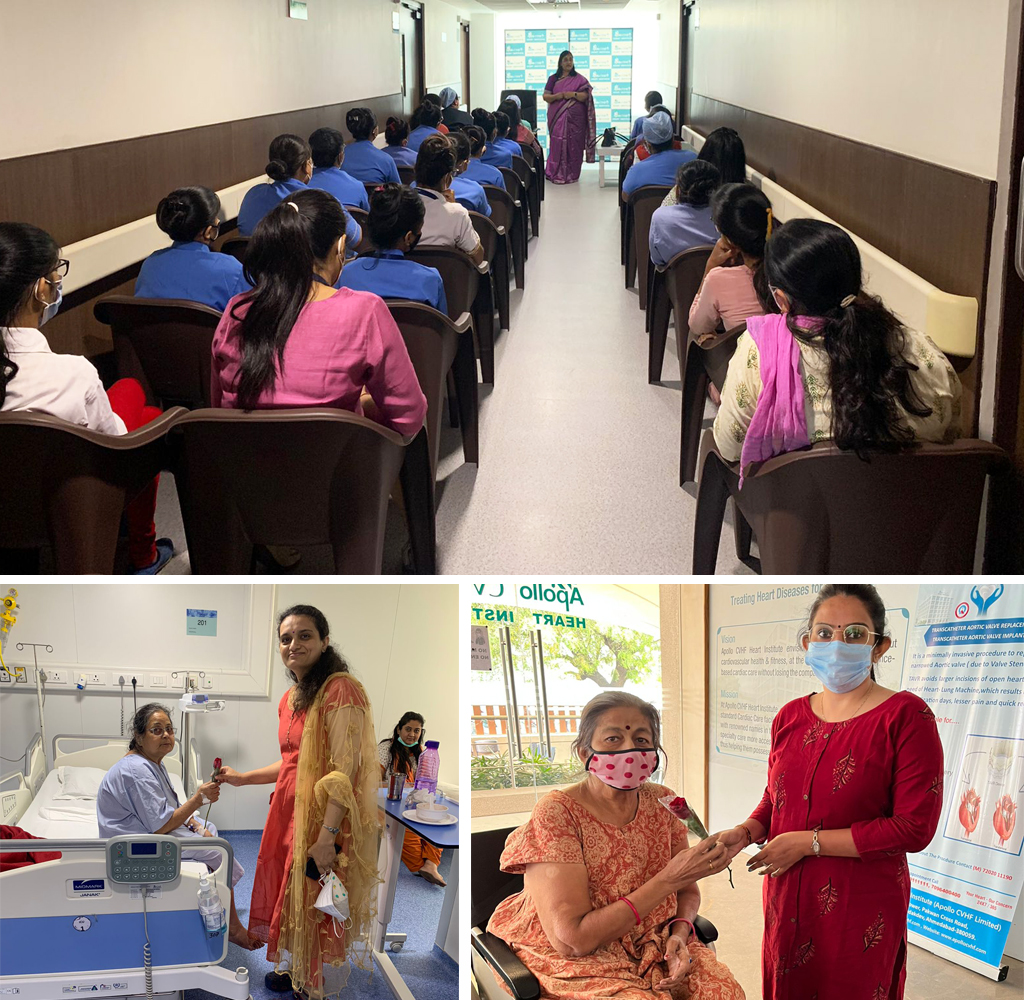 Click here to view more…
March
2022
On 4th March 2022 our Cardiologist Dr.Dushyant Balat presented Health Talk on the topic “Lifestyle & Medicines role in Prevention of Heart Disease” at one of the corporates at Kathwada GIDC Estate. 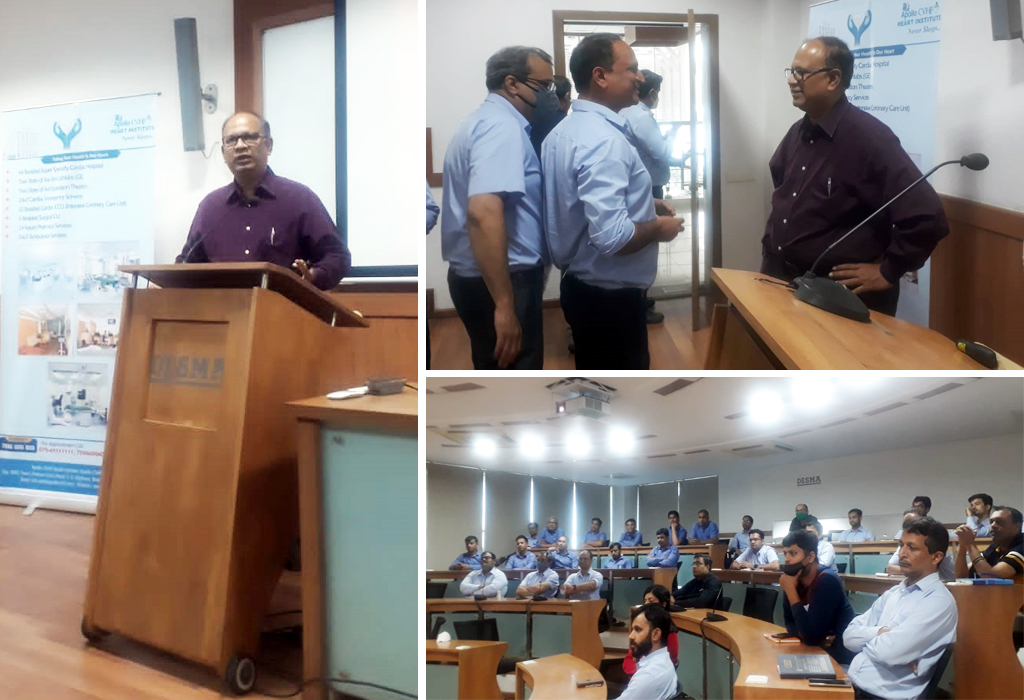 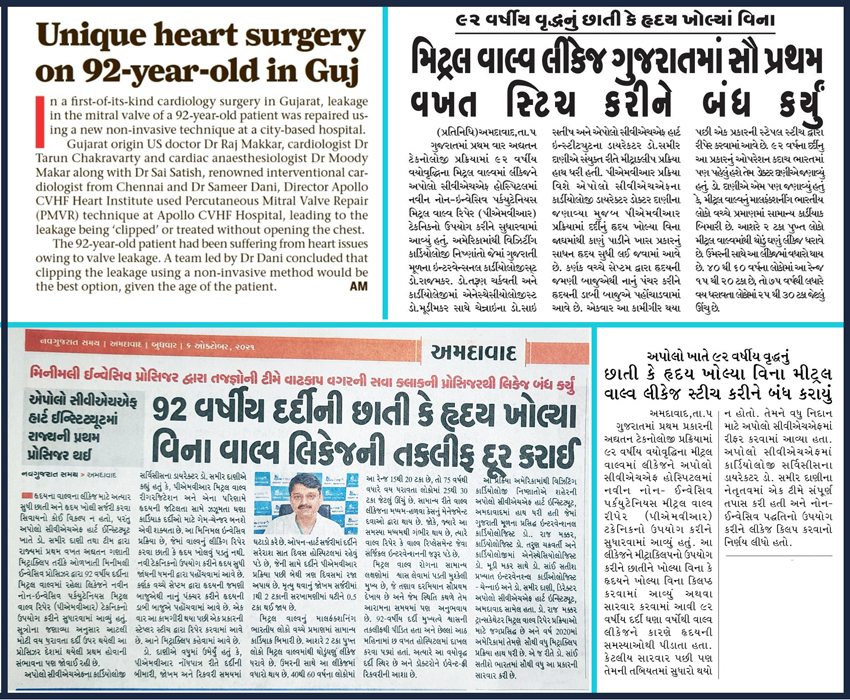 In a first-of-its-kind advanced cardiology procedure in Gujarat, leakage in the mitral valve of a 92-year-old elderly was repaired using the novel non-invasive Percutaneous Mitral Valve Repair (PMVR) technique at Apollo CVHF Hospital. The leakage was `clipped’ or treated without opening the chest or the heart using Mitraclip.

The procedure was carried out at Apollo CVHF Heart Institute Ahmedabad by three visiting Cardiology experts from US: renowned interventional Cardiologist of Gujarati origin Dr.Raj Makkar, Cardiologist Dr.Tarun Chakravarti and Cardiac Anaesthesiologist Dr.Moody Makar along with Dr. Sai Satish -renowned interventional Cardiologist from Chennai and Dr.Sameer Dani. Dr.Raj Makkar is a world expert in transcatheter Mitral valve repair procedures and has done the highest number of Mitraclip procedures in US in 2020. Correspondingly Dr.Sai Satish has done highest number of such procedures in India.

The 92 years old patient had been suffering from heart issues owing to valve leakage for
12 years. Even after several interventions and treatment, his condition did not improve. He was referred to Apollo CVHF for further diagnosis. A team led by Dr. Sameer Dani, Director, Cardiology Services at Apollo CVHF, conducted a thorough investigation and derived at clipping the leakage using a non-invasive method. Given the age of the patient, any outwardly invasive procedure or surgery would have been critical.

Speaking about the procedure of PMVR, Dr Sameer Dani, Director, Cardiology Services at Apollo CVHF said, “PMVR is a likely game-changer for many cardiac patients battling mitral valve regurgitation and resultant heart complications. It is a minimally invasive procedure wherein the chest or the heart is not opened to repair the leaking valve. Using this new technique, the heart is approached through the femoral artery. By making a small puncture from the right side of the heart through the septum between the atrium, the left side of the heart is reached. Once it is done, the leaking valve is simply repaired by delivering a stitch which is a kind of a staple. It is called Mitraclip.”

Dr Dani further added that PMVR significantly reduces the morbidity, risk and recovery time of the patients. Against the average seven-day hospitalization in open-heart surgery, a patient post PMVR procedure is discharged in two to three days. The risk of mortality is cut from 1-2% in surgery to 0.5%.

Malfunctioning of Mitral Valve is a relatively common cardiac ailment among the Indian population. Nearly 2% of the adult population has some degree of leakage from the mitral valve. With age, the mitral valve leakage incidence rises. In the population of 40-60 years, it ranges from 15-20%, while in 75 years plus, this is reported to be as high as 25-30%.

Mild-moderate cases of valve leakage are usually managed through medications; however, surgical interventions such as valve repair or valve replacement are needed when it progresses to moderate to severe.

The typical symptom of Mitral valve disease is breathlessness which first manifests during exertion but later, as the condition deteriorates, persists even at rest. The 92-year-old patient also mainly suffered breathlessness and was hospitalized six times in the past eight months. The elderly patient is stable now, and the doctors are hopeful of an event-free recovery. 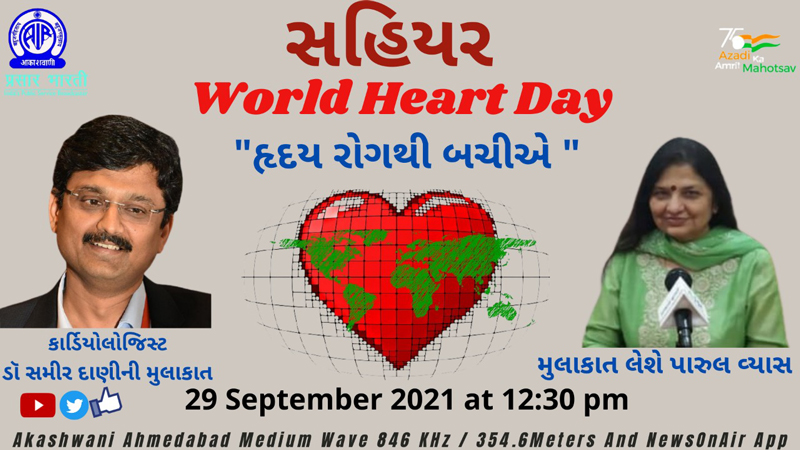 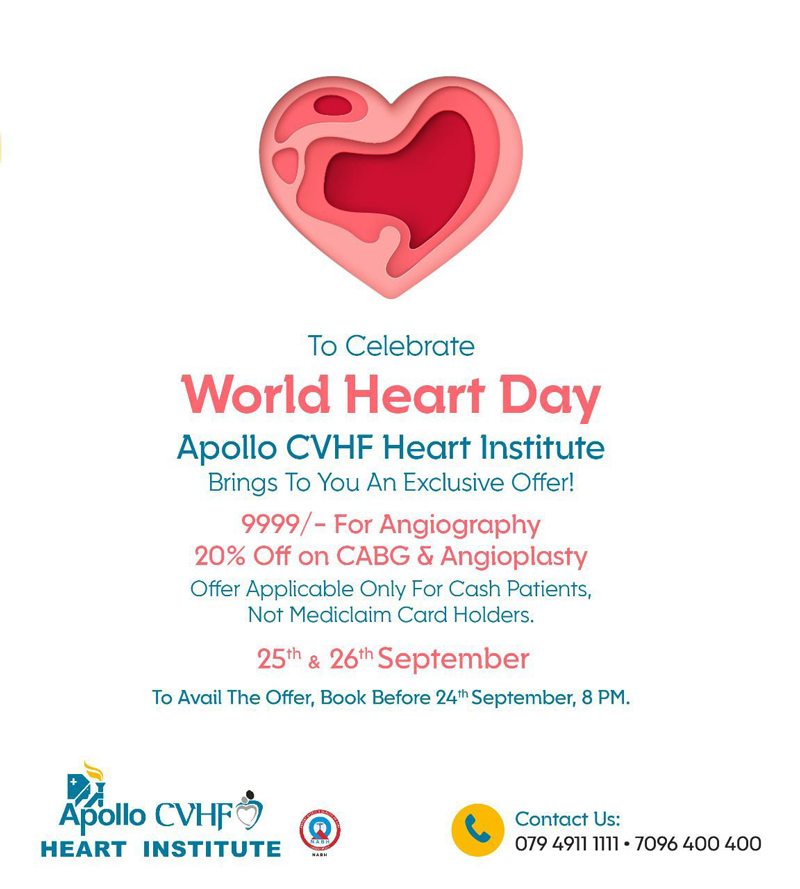 Reach out to a doctor or
Book your appointment right away